We're open 24/7 and ready to help you during COVID-19 with Sanitization Solutions.

Connecticut » Blog » Current Event » Hurricane Season Is Upon Us

Hurricane Season Is Upon Us

Hurricanes are one of the most destructive forces that humans must cope with, though fortunately for us, with the rise of climate change-induced weather anomalies, hurricanes are becoming much more common, and this will undoubtedly help in our efforts to prepare for their arrival.

It was predicted that the El Nino storm season would usher in an increase in Atlantic hurricanes this year, but that didn’t happen.

Now climatologists are saying that La Nina might have an impact on the typical cyclone frequency as well.

But one thing is for sure – there will always be hurricanes, and many of them will hit the good people and their homes in Connecticut.

Knowing that the inevitable will definitely occur again in Connecticut, and that humans won’t stop occupying the coastal areas anytime soon, the smart money is on preparing homes and businesses for what they can expect in these situations.

When it comes to hurricanes and what we can do today to prepare for their affects going forward, the best data we have comes from the situations of the past that we weren’t prepared for entirely, and in Connecticut that means dissecting Hurricane Floyd and determining what has changed.

Floyd, so far, was among the most powerful Atlantic Hurricanes every recorded.

In total it was the third most displacing cyclone ever recorded when it forced the evacuation of more than 2.5 million people in the five states intersecting its path.

All told, Floyd was responsible for 57 deaths and flooding that did nearly $10 Billion in damages accounting for inflation.

Much has changed on the east coast since Floyd struck landfall in 1999, but also much hasn’t and ultimately this is more concerning.

The factors that allowed Floyd to flood so many homes have not been ameliorated to significant extent since the 99’ hurricane season despite nearly twenty years of time to prepare.

Staying Safe and Being Ready For the Next Floyd

The good people of Connecticut know deep down that there will be another Floyd, and it may even be worse because of the compounding effects of climate change.

What we learned from Floyd can be applied today, and there is still time to get prepared for the worst it may bring, and homeowners should be vigilant about implementing these changes if they want to stay safe, and dry during this upcoming hurricane season. 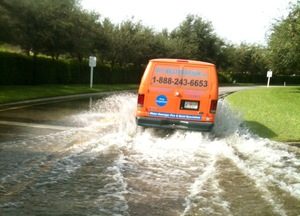 The power may be out for days after a hurricane, either from winds knocking down power lines, or even issues at the municipal level with capacity and transmission to affected areas.

Flooding tends to occur in the more low laying areas at the coast, but a hurricane also brings enormous amounts of rain along with a storm surge, so any local area streams and rivers will become deluges that can’t hold any more water.

If a structure sits near any of these bodies of water, the likelihood of flooding is dramatically increased, and the best protection may be a flood insurance rider on your homeowner’s policy.

For those that have the geographical means to do better than financial preparations, the best methods are the tried and true ones. Sandbags keep out flood waters, sump pumps eject what gets through the line, and taking all valuables to high ground is the most trusted way to keep them from being water damaged.

Ultimately the best preparation comes from having knowledge, so it might be best to talk to your neighbors that have been in the area for a while and see if they remember what water damage effects Floyd had on your particular area, and then use that information to create a plan for staying safe during this hurricane season.

Did you experience Hurricane Floyd? If So What Happened?